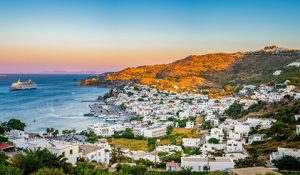 Patmos, a small Greek island in the Aegean Sea. One of the northernmost islands of the Dodecanes complex. Patmos’ main communities are Chora (the capital city), and Skala, the only commercial port. Other settlements are Grikou and Kampos. The churches and communities on Patmos are of the Eastern Orthodox tradition.

The Island of the Apocalypse and the Jerusalem of the Aegean – as Patmos is called worldwide – the island where Saint John the Theologian was exiled to become a hermit and then to write in 95 AD the sacred book of Revelation, is one of the most important religious and atmospheric destinations, without lacking the cosmopolitan air of an Aegean island or the cultural tradition.

Patmos is a symbol of faith and communication with God, it is today a pole of attraction for monks from all over the world. This humble “Sinai of the Aegean», by now a traditional place for asceticism and prayer, has embraced many monasteries, kathismata (small monastic units) and hermitages.

The island ,witch with its devoutness and its original beauty consisted a source of inspiration not only for the Nobel-laureates Greek poets Seferis and Elytis, but also for the German lyric poet Friedrich Hölderlin, who shocked by the natural beauty of the island.