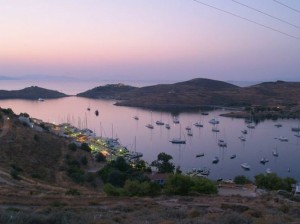 Kea Island, also known as Tzia (Jia), is an island with unique natural beauty, and intense traditional character that belongs to the Cycladic complex of islands. Kea has valleys, streams, hills, orchards, olive groves and beautiful sandy beaches that along with the picturesque villages of the island create an idyllic environment.

Kea is located between the southeastern side of Attica and the islands of Kythnos, Syros and Andros. It covers an area of 130.5 square meters; it has a coastline of 81.5 kilometers, and a population of approximately 2.500 residents.

It is the ideal place for those who wish for peaceful and relaxing holidays, and for those who want to enjoy the hot sun, take walks in the picturesque seaside and mountainous villages, and explore the natural beauties of the island. The short distance from Athens makes Kea ideal for weekend, and not only, trips.

Chora, which is also named Ioulida, is the capital and the administrative centre of Kea, and it located in the centre of the island. It features the traditional houses with the tiled roofs, the cobblestoned streets and many stairs.
Korissia, also known as Livadi, is the port of Kea and it is in the west side of the island. The beach of Korissia is very picturesque with lots of stores, bars, café and restaurants while the area has some of the best beaches of the island as well as important archaeological and historical sites, something that makes it the most popular area of Kea.

Pisses is a picturesque seaside village in the west side of the island, built on a cove. Pisses is famous for the wonderful sandy beach, and the impressive archaeological site of Poiiessas. The settlement of Otzias is located as well as on a cove but in the north Kea, it is a beautiful village with stone houses, and a wonderful beach with tamarisk trees.

Koundrouros is in the west side of the island, and it is popular for its beautiful bays and beaches as well as the mansions and the wind-mill houses. The settlement of Vourkari is a cosmopolitan resort in the northwest Kea with lots of bars, café, taverns and restaurants along the seaside street. There you will see luxurious yachts and the celebrities that cruise the Cyclades.

Kea is an island that’s becoming popular as a summer weekend getaway for the Athenians, but it’s still quiet throughout the week. Some of the beaches in Kea Greece are arranged with tourist facilities, such as Gialiskari, Koundouros and Korissia. The rest of the Kea beaches are small and secluded, suitable to enjoy privacy and insulation.

As the island is not quite accessible to international tourists, the organized activities in Kea are limited. Swimming is the only thing you need to do. Much of Kea’s beaches are unorganized and provide excellent opportunities for private swimming. The most coordinated beach is Koundouros, but there are also a number of entirely secluded bays.

Kea is very famous for its antique car rally held every year in June. The main festival of Kea is in honour of Agios Charalambos held on 10 February, with music and dancing. In August, one can attend Simeonidia which includes theatrical and dance performances, art exhibitions etc.