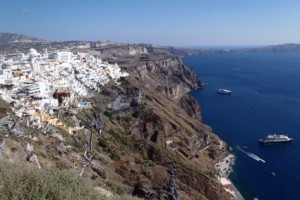 Welcome to Santorini of the volcano, the island where the view is breathtaking with the best sunset of the Aegean!
Those who loved Santorini, loved it forever. The locals say that it has a heart that beats loudly and vibrates the mountains, the land, the sea.
Auspicious name, due to the Venetians referring to Agia Irini, causes a pleasant contradiction with the intense, sometimes “tough” and sometimes sweet atmospheric personality of the island.

Beautiful and Round its real names, this island of lustful illusions, is composed in essence of five islands: Thira, Thirasia, Aspronisi, Palia Kameni and Nea Kameni. There should be no other destination on earth that enjoys such a favor: “wanted” or not, the self-respecting world traveler who at some point wants to earn the title of “world traveler” does not mean that he has not visited at least one times the southernmost island of the Cyclades. Simply because it is unique.

That is why it is one of the three most famous European destinations.

The current form of Santorini is due to a series of eruptions that affected the entire Aegean. When the lands of the island were stabilized, during the Minoan era, its colonization began. Anxious, the man promoted it to one of the most important shopping malls of the time.
Thirasia and Nea Kameni emerged a little later, between 1550-1500 BC, from a powerful volcanic eruption, which caused the division of the central part of the island.
After the fall of Constantinople, and for the next 6 centuries the island was initially under the administration of the Duke of Naxos and then under the rule of the Turks, until it was annexed to the Greek state. In 1956 the island was completely destroyed: a large volcanic eruption accompanied by a strong earthquake shook Santorini, but did not prevent its inhabitants from rebuilding their property, giving impetus to the cultural and tourist development of the island.

The whole island is an attraction.
The important archeological sites, the museums, the monasteries, the churches, the preserved settlements, the volcano, all are pieces of an incredible image that unites yesterday with today, proving once again how special Santorini is. The undoubted secularity of the island, its intense rhythms and its flexible tourist infrastructure, promise travelers that nothing will disturb their vacation, even in the slightest. In terms of gastronomic delights, Santorini cuisine is famous for its special flavors, which accompanied by local wine, are simply heavenly. Be sure to try its wonderful fava beans and sun-dried tomatoes. As for the nightlife, you will not be disappointed, since here too there is flexibility: every mood is fulfilled in the best way, not only in the capital, but in most settlements of the island.