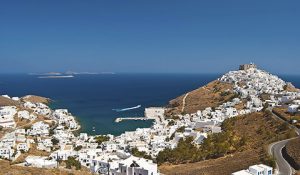 Discover the Butterfly of Aegean !!!

Astypalaia, the bridge between the Dodecanese and Cyclades with butterfly shape.

Located between Anafi, Kos and Amorgos, is the westernmost island of the Dodecanese.

The town, which is usually made up of mainly summer holiday visitors, embraces the bay with its long dock where fishing boats come round and includes the orchards and vineyards of ascends through the steep mountains of this side of the island, offering a panoramic view of Vai bay, and ends up at the closed bay of Vathi.

Steno, as the local townspeople refer to it, divides Astypalaia into the eastern part known as the “Inner Island” and the western part known as the “Outer Island”. The concrete road towards the “Inner Island” stretches past the successive beaches “Marmaria”, “Steno”, “Plakis” and the “Blue Limanaki” until it reaches Analypsi or Maltezana after a total of 9 Km. Just a little before the town, a fork in the road leads to the airport of the island (10 Kilometers from Chora). Analypsi is one of the three towns of Astypalaia. It is also called “Maltezana” because it was first settled by Maltese pirates.

Two of the most beautiful beaches of the island can be reached by the tourist boats which set off from Pera Yalos and Maltezana. These beaches are Kaminakia and Vatses.