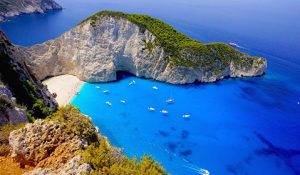 Zakynthos, known internationally with the name “Tzante”, or Phioro Levante (= Flower of the East) according to the Venetians, is one of the islands of the Ionian Islands. It is the eleventh in size Greek island and the third, after Kefalonia and Corfu and the second in population island of the Ionian islands.

Its area is 406 square kilometers and the population is 40,758 inhabitants (2011 inventory). From the Peloponnese is 9.5 nautical miles (from Kyllini in the prefecture of Ilia) and 8.5 nautical miles from the nearest north on this island, Kefalonia. Its inhabitants are called Zakynthians, or Zakynthians. “Yria”, one of the ancient names of the island of Zakynthos.

The beaches of Zakynthos are renowned for its natural beauty and exotic emerald sea. The most famous is the beautiful Navagio Beach (Shipwreck), which has soft white beaches, turquoise seas, spectacular cliffs surrounding it which can only be reached by ferry.